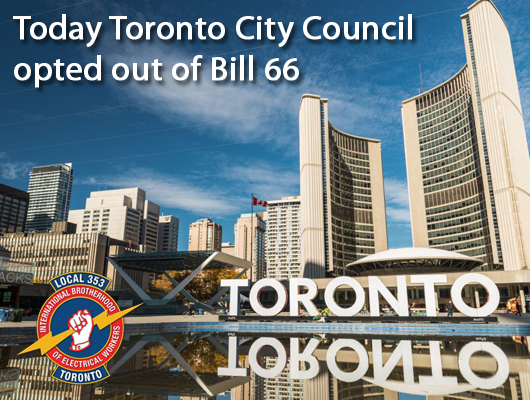 The IBEW CCO applauds Toronto City Council for its June 20 decision to opt out of Bill 66, ensuring a continued relationship that allows our highly skilled electricians to continue to deliver professional and safe service that benefits both the public and workers.

However, the provincial government amended Bill 66 in March, giving municipalities and other public entities the choice of opting out of the new rules and maintaining its current agreements.

Toronto councillors voted 20-4 in favour of retaining the city’s status as an employer bound to nine trade unions with collective agreements in the industrial, commercial and institutional (ICI) sector. The decision further strengthens the important relationship held between the city and IBEW electricians as well as other construction unions.

“Toronto councillors voted in favour of safety, reliability and professionalism. This decision demonstrates the trust that the construction unions have earned after decades of service in this city,” said James Barry, Executive Chairman of IBEW CCO.

Both Martin and Barry agree that this outcome helps to ensure continued high standards of safety and eliminates the potential risks to the public of unqualified and untrained workers building key infrastructure in the city.

For more information, visit this link: Toronto has voted 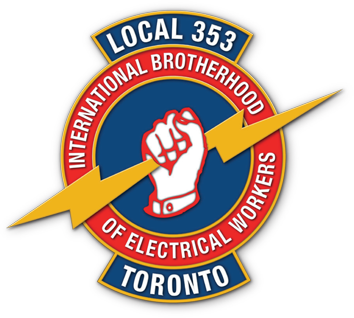 News about the novel coronavirus (COVID-19) outbreak continues to make headlines and has now been categorized as a global pandemic. Here at TEIBAS we want to keep you and your family safe, and informed. We’ve put together some information for COVID-19 related absences, and what you should do if you become ill or quarantined.

IF YOU ARE QUARANTINED OR ILL DUE TO COVID-19

If you are required to be under quarantine (as directed by a medical doctor or public health official) or ill due to COVID-19, please notify both your employer and the IBEW Local 353 Union Hall at 416-510-3530. The staff at the Union Hall will able to provide you with the specific COVID-19 form that will need to be completed to apply for short term disability benefits.

Canada Life will consider paying STD benefits from the start of the quarantine period/illness. This way you don’t suffer financial hardship while you’re staying home to help fight the outbreak.

Normal eligibility requirements are still in effect for the short-term disability program. If you do not qualify under the short-term disability program, you can still apply for Employment Insurance (EI) Sickness Benefits. The Federal Government has waived the one week waiting period for COVID-19 related EI Sickness Benefit claims. Please visit their website at: www.canada.ca/en/services/benefits/ei/ei-sickness to apply.

Individuals that may be infected with COVID-19 may have little to no symptoms or be aware that they have symptoms of COVID-19 because the symptoms are very similar to a cold or flu. Symptoms may take from 2 to 14 days to appear after exposure to COVID-19. This is the longest known infectious period for this disease.

Most people develop only mild symptoms. But some people, usually those with other medical complications, may develop more severe symptoms which can be fatal.

There are currently no vaccines available to protect you against COVID-19. It is strongly recommended that all individuals take the following precautions to help reduce the risk of infection or spreading infection to others:

For all inquiries related to out-of-country medical emergency, and travel assistance, or if you become ill while travelling, please contact Global Excel at 1-866-870-1898.

Travel advisories issued by the Government of Canada can impact travel insurance coverage. Please visit https://travel.gc.ca/travelling/advisories to confirm if your intended travel destination is impacted by any travel advisory, prior to booking or departing on your trip.

For the latest information on COVID-19, please visit the following Government of Canada websites: